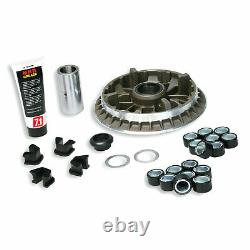 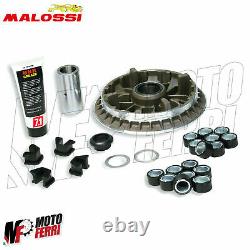 Malossi multivar mhr next variator for Yamaha 500 cc t-max 2004 - 2011. This product sheet has been automatically translated. If you have any questions, please do not hesitate to contact us.

Multivar variant 2000 mhr following malossi 5114855 2 roller kit of 16gr. This new dimmer, developed from the many years of experience gained on racing circuits and the cam technology available today, represents the evolution of previous generations of dimmers and offers performance results at the highest levels. As the speed change curve clearly shows, the technicians' work has focused on the further widening of the range of operation of the dimmer, in particular the short ratio, thus obtaining even more acceleration and recovery and improving the linearity of the speed change, while maintaining almost the engine speed. Remains unchanged throughout the speed change phase of the dimmer. We have further reduced the tolerances between the hub and the ring, reducing the roughness to a minimum, to get a really unrivalled variator!

This item is in the category "auto, motorcycle - parts, accessories\moto: spare parts\other". The seller is motoferrionlinestore and is located in this country: it.

This item can be shipped to the following country: whole world.